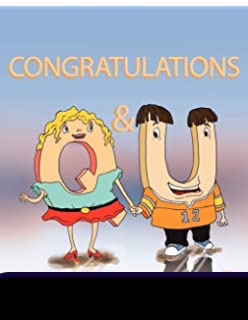 Nothing infuriates me more then the letters Q and U. Like why aren’t Q and U next to each other in the alphabet? Hell they aren’t even next to each other on the damn key board. You can’t use a Q without a U, wouldn’t it make way more sense if we just kept the two of them right next to one another? It’s a little outrageous don’t you think?

I remember back when I was in kindergarten, we celebrated Q and U’s wedding (we had little blow up letter people) in such a glorious way. We had all the other letter people of the alphabet siting watching the ceremony. On that day in Kindergarten they told us that they’re inseparable. From that day on teachers have just about drilled it into my brain that when ever we use the letter Q, there’s a U lingering right after it in it’s shadows. It’s one of the few things I’ve retained from my elementary days. The other was the months of the year poem. I can’t forget that one.

Is Q even a consonant or a vowel? Now that I’m thinking about it I have no idea. I feel like it’s like the letter Y, it versatile, because it can go both ways. I feel like it’s a consonant but if you told me it was a vowel, I’d believe you. I just don’t understand why they couldn’t like put the Q with the P on the keyboard initially when they came out with the keyboards. I know the home row and how it’s based on how frequently their used. I just think it’d make more sense to have them on the same half of the board next to each other. If I’m typing why do I really have to reach all the way across the keep board to just to type the word quiet? Just think about how easy it would be if they were next to each other, one finger could hit them both. Even in the alphabet, why the hell wouldn’t they have put the letters one after the other. They’re meant to be together, it seems only logical.

I hate it, if you haven’t noticed it genuinely irks me. It makes searching for movies or music videos that much more annoying and tedious. They keep Q and U the furthest away from each other just to be annoying. Don’t even get me started on HBO’s search bar. They have the whole alphabet written out in one line. If I star with the letter Q by the time I get to U I forgot what the hell I was searching. Like the least you can do is put them next to each other and save us some damn time and let me get on with my search. They belong together, like lamb and tuna fish. They have to be together. I’ll keep reiterating, they go together. Why can’t we just keep them next to each other?